Learn how to play through a Progressive Metal style rhythm riff that incorporates notes from the Phrygian Dominant mode of Harmonic Minor. Music theory, scale shapes and options for application are included…

In recent years progressive rock and metal bands like Iron Maiden, Dream Theater and Opeth have continued to build on the platform of this style taking it even further.

The concept of this music style involves blending the effects of using both clean channel and heavy overdrive /distortion sounds played on the electric guitar.

These sounds and effects are often blended with a fusion of different compositional elements taken from the structure of several music styles, such as; classical music, jazz, classic-rock, folk and even world-beat music.

In the world of standard “radio friendly” rock compositions, the song arrangements will tend to be more typical to what is found in pop songs, (i.e., short-segment song sections generally containing the standard; verse, bridge, and chorus arrangement).

The format of your average rock song works quite well for playing on radio stations since it also allows each piece to keep within a similar approach and time length of time.

On average, songs played on the radio will fit within a “3 min.” time frame. This winds up generating a more palatable music formula for the creation of play-lists when broadcasting songs and advertising across the airwaves.

Progressive Metal song formats are different. In a progressive metal piece, the listener will tend to get exposed to a multitude of expanding sections throughout the piece. This will often involve moving through different keys, modal scales and even different time signatures.

It is also common for progressive metal songs to have much longer play-times of 7 to 9 min. (or even longer). All of this comes together to create songs that on one hand are certainly more creative and definitely more complex. However on the flip-side, these songs are obviously not exactly radio friendly.

PREFERRED SCALE TYPES:
Along with the common scales like; Natural Minor, Pentatonic, Dorian, Phrygian and Mixolydian, one of the most widely used progressive metal scales comes from the 5th mode of Harmonic Minor. It is called the, “Phrygian Dominant,” scale.

The Phrygian Dominant scale is constructed from the fifth degree of the Harmonic Minor scale. It is unique in two ways. 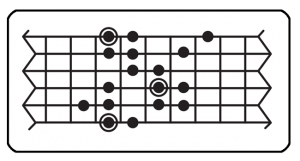 RIFF BUILDING:
Unless a guitarist has had some prior exposure, the sound of Phrygian Dominant scale can be quite different sound to work with.

The Phrygian Dominant arrangement of tones is not based upon the common format of most rock power chord riff ideas found in standard rock.

Common rock intervals such as minor thirds and diminished fifths can often come across as “out of sync” when developing rock riffs with Phrygian Dominant scale.

Study the riff provided in this lessons download. Keep in mind that the example riff is quite busy and it might not be all that easy to initially work at soloing over.

Take your time, practice it and rest assured that after awhile both your ear and your hands will become more accustom to the sound and feel for of this scale.

PRACTICE TIP:
Try creating a different /modified version of the riff found within this lesson. In your modified version, work toward having less melodic movement, (simplify things).

By creating a more simplistic riff idea, you should find it easier to apply the sound of this scale in riff building. Plus, it will also be easier to incorporate improvisational parts over a simplified riff.

Over time you’ll come up with a number of soloing ideas that will allow you to get more and more involved musically. At that point, you’ll be able to evolve your compositions up to higher degrees of complexity within this style.