Q: How do I find the key center of a Chord Progression when it is just Power Chords?
~ Mario

A: Power Chords are a popular harmonic idea that can be found applied across many styles of guitar music. Even though they are called “chords,” it is important to understand that power chords are not actually chords – rather, they are an interval.

This means that power chords are not specifically able to be defined or identified by a chord quality, (i.e., “major” or “minor”).

INTERVALS:
Intervals are two notes that form a harmonic distance. When used within guitar riffs or licks, they are most often referred to as a, “dyad” in musical harmony, (or as a “double-stop” in guitar terminology).

NOTE: In music, a dyad is a set of two notes or pitches that, in particular contexts, may imply a chord. Dyads can be classified by the interval between the two notes.

TWO-NOTE GUITAR IDEAS:
Two note chords (dyads /double-stops), are highly popular in guitar music and are especially popular for use within rhythm and lead guitar phrases.

Aside from the power chord, other popular two-note chords for guitar applications include; “thirds,” sixth’s,” and “octaves.”

TONALITY IN POWER-CHORD RIFFS:
Tonality, ( the major or minor color of a song part ), is defined by the movement of power chords off of each chords root.

When performing song parts that are built upon the use of power chords, it is important to pay close attention to the root note movement of each power chord.

The roots of each power chord will need to be analyzed back to the major or minor scale degrees of the home chord for the progression.

In order to judge the key center of a song part, (within a composition that exclusively uses power chords), the guitarist must view the movement of one power chord to the next as a series of intervals within a scale.

All of the power chord root movements contained within a song section will need to be crossed-matched back to a key signature.

POWER CHORD PROGRESSIONS:
Example one is a chord progression from the key of “A Major” 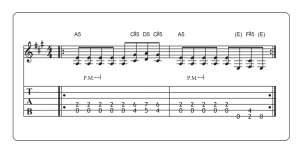