Practicing scales is one of the most important topics for guitar players. When making a study of scales there are several concepts that guitar players need to keep in mind. These include Tonic /Root note organization, fingerboard range (low, mid and high), as well as, practice with respect to rhythm and time. This lesson explains these critical areas using both “CAGED” Theory principles, along with a step by step breakdown of a scale rehearsal system…

How should I make the best use of the memorized major scale positions to improvise and create music. I don’t want to be able to play all of the scales, but not be able to make any music out of them.

A: How To Practice Scales

THE “CAGED” THEORY:
The “CAGED” Theory (if you haven’t heard of it), is a study of five specific major quality chords found in the open position, (C, A, G, E, and D major chords).

The purpose of the “CAGED” Theory is to focus on the octaves found within these five chord patterns.

The octaves for each chord are based upon specific string sets that are unique to every one of the open chord patterns.

For example; The “C Major” chord in open position contains octaves of “C” based on the 5th and 2nd guitar strings. This octave pattern relates to the “Pattern 1” shape found in the Creative Guitar Studio curriculum. 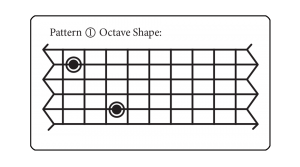 The “Pattern 1” octave shape can be used as a template that can be positioned anywhere along the neck laterally. It works as a superior method to establish Tonic tones (Roots) of any scale, anywhere along the entire span of the guitar fingerboard.

Movable major and minor triad chord patterns (across the entire fingerboard), are introduced in that course. The “Advanced Guitar Program” applies scales and arpeggios onto the octave patterns.

WORKING WITH THE SCALE PATTERNS:
There are several important points to keep in mind when it comes to practicing scales on the guitar. They range from the time that is spent working on memorization, to the methods used for drilling on the shapes for hours and hours with a metronome.

I decided to highlight seven of the top practice concepts for working on scales. They are listed below in order from step one to seven.

STEP 1). Start with a 4 to 5 day practice plan. Spend each day working on new keys and study the scales all over the fingerboard in every position high and low.

STEP 2). Memorize the geometrical layout of every new scale pattern. Get the scale up to a level of memory where you do not need to look at the scale diagrams for recall.

STEP 3). After memorizing the scale, turn on a metronome. Work through several rhythmic duration times, such as; eighth’s, sixteenth’s and triplet variations.

As you get better with the scale patterns, turn the metronome up to faster and faster tempos.

This type of scale practice will help to improve both your long-term recall ability and your physical performance technique.

STEP 4). Move along the fingerboard playing up one shape and down the other with the same key signature /scale type. Ascending and descending key center drills, (combined with vertical and horizontal scale practice), will produce fantastic results.

NOTE: The end goal with scale development is to have the patterns become effortless under your fingers. This will be critical for your long term success when you turn your focus toward using the scales for improvising and composing.

STEP 7). Study the Pentatonic and Arpeggio shapes along with scales, (covered in the, “Advanced Guitar Program”).