Fingerpicked patterns are not only fun to play, easy to learn and sound great, but they offer the guitar player a chance to become better at their picking hand accuracy. In this lesson, we explore the fingerpicked pattern concept, as well as, its application in guitar music…

Q: I’ve been into guitar on and off for almost 30 years. I used to jam with my cousin, but he’s since moved and I’ve found myself doing mostly finger picking now. To my surprise, I’m not doing too badly, and I’m having a lot of fun. My question is on basic finger picked patterns. Could you show some, and demonstrate the correct right-hand plucking orders.
Orman – Los Angeles, CA. USA

A: The process of playing guitar using finger picked patterns is one of the best ways to practice finger style guitar technique.

By making a study of this, “Fingerpicking Pattern,” approach, the overall process allows a guitarist to learn one group of plucking hand movements and then take that very same plucking pattern series into other chords that exists within the same piece of music.

Since the fingerpicked pattern is almost mathematical in its structure, any pattern that is established across one chord, can then be repeated from that chord into the next chord within the song.

FINGERPICKING PATTERN CONCEPT:
The “picking pattern” concept quickly establishes a way of covering an entire set of chord changes for a chord progression within a piece.

Practice playing the 2-bar fingerpicking pattern that is shown below. It transitions from the a “C Major” chord, over to a “G Major” chord. 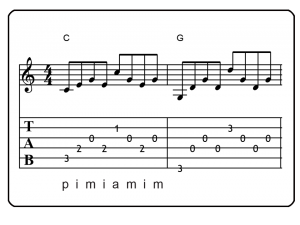 In the example shown above, each chords fingerpicking pattern applies a similar string group orientation for the plucking. This is the foundation for how the entire process of using fingerpicked patterns operates.

Using the various examples (as shown throughout this lesson), learn the basic format of this approach. Then work beyond the examples so as to apply this technique across chord shapes of all types.

FINGERPICKING APPLICATION:
The fact is, there are many songwriters (across many guitar styles; folk, country, and even rock), who use this type of fingerpicked pattern method to compose some or even possibly all of their songs.

Once a finger picked plucking pattern is established, (and it becomes well rehearsed), the picked pattern can then be applied across a group of chord changes within a song section to quickly compose the song’s sections including; intro. sections, verses, the chorus, or possibly bridge sections.

In the video lesson, (and throughout this lessons associated PDF handout), I demonstrate a collection of common finger picked patterns that can be used for playing over an almost limitless number of chord types and musical styles.